Grandview Children’s Centre’s new headquarters will be named after a man who is well known for his kindness, compassion, hard work, integrity and his many years of giving generously to his community.

“Jerry has spent his entire life building communities, now his belief in Grandview and his generous gift will help to build an unparalleled future for generations of Grandview Kids,” said Grandview Children’s Centre CEO Lorraine Sunstrum-Mann.

The Provincial government announced approval of the project in May 2017, including $31 million in funding for construction.

The new Grandview is expected to cost $53 million. Grandview Children’s Foundation is embarking on the BELIEVE campaign to raise the funds needed to build the new headquarters and to support the specialized programs and services offered by Grandview.

“Simply saying thank you is not enough to show just how grateful we are for Jerry’s lead gift. We will honour him forever by naming the new headquarters after him,” explained Grandview Children’s Foundation Executive Director of Development Brigitte Tschinkel. “The journey to a new Grandview has officially begun. We are happy to have Jerry and his wife Lyn taking the next steps with us.”

“Touring Grandview Children’s Centre reinforced my belief in this wonderful organization. Opportunities, specialized services and support are provided to children and youth by expert staff that truly care about helping kids achieve their dreams,” said Jerry.

The Jerry Coughlan Building of Grandview Children’s Centre will be constructed on a parcel of land in the Town of Ajax on Harwood Avenue North.

The next steps in the project include Grandview working with the Province to complete geotechnical and environmental due diligence on the site followed by the finalization of the architectural design, and construction. 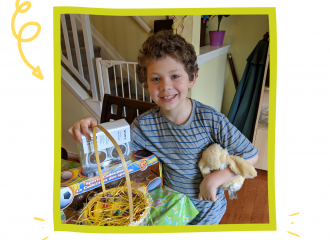 Meet 10-year-old Gavin! Since he was able to make any kind of utterance, he could not be kept quiet! His mother Melanie says, “Gavin was slow to even begin making… END_OF_DOCUMENT_TOKEN_TO_BE_REPLACED