Since he was able to make any kind of utterance, he could not be kept quiet! His mother Melanie says, “Gavin was slow to even begin making any sounds at all. When he finally began uttering “mama” or “dada”, he was at least two and a half years old…no one knew what he was saying, including myself or his siblings. Needless to say, strangers could make neither hide nor hair of his utterances”

While waiting for speech therapy at Grandview Kids, Gavin was seeing a private speech therapist, but his apparent lack of progress caused his mother to put an end to it. Melanie describes that Gavin’s first several years at school were tough, “he felt misunderstood at school by his peers, and was sometimes ostracized. He felt that he didn’t belong, and his self-esteem was suffering.”

Due to his severe difficulties with speech and trailing his experiences in private sessions and at school, he was referred to Grandview.

They got the call from Grandview Kids that it was his turn. This is when he met Grandview Kids Speech-Language Pathologist, Erika! Melanie attributes Gavin’s ultimate successes with Grandview Kids to the “hard and dedicated work of Erika”. When asked to elaborate on some of the ways that Grandview Kids has impacted Gavin’s life, his mom states:

“While I did have an expectation that his speech would improve, what astonished me were the other areas of his life that were impacted just as profoundly. Gavin has become a happier, self-assured, confident and incredibly outgoing child. These are not qualities that I would have ascribed to him prior to commencing speech therapy at Grandview Kids. He is a different child now, in all the right ways. Prior to this therapy, he was very shy and reserved and did not speak to anyone outside his circle. Even conversations with his family were strained due to the embarrassment and frustration that would arise when he was not being understood.

After even just a handful of sessions, he developed the confidence to approach people outside his social circle and hold sustained conversations with them. The near-immediate change was breathtaking to witness. My little boy is learning to become more independent and to make his mark in this world!”

Gavin looks forward to his speech therapy sessions. This is the time in his week where he gets to hang out and play games with Erika. She incorporates these games into his learning, and sometimes, he forgets that he’s even learning while he’s playing!

Melanie comments on the chemistry they have built throughout Gavin’s speech therapy sessions, “[Erika] is so incredibly kind and understanding, as well as knowledgeable, and always knows exactly the right thing to say or do to maximize Gavin’s potential”.

When asked about the future, and the goals she hopes to see Gavin reach over the next couple of years, Melanie says:

“What I want for Gavin is what he has always wanted for himself: to be able to communicate without difficulty. This is something that so many people, myself included, take for granted, and yet Gavin struggles with this on a daily basis.

I finally see the light at the end of the tunnel and Erika is the one holding the torch! Thanks to Grandview Kids, I can now envision sometime in the not-too-distant future, Gavin in deep conversation with someone, and they are having no clue that he ever had a speech problem.” 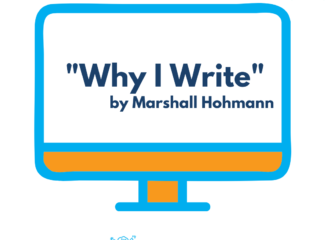 My Inspiration to Write

Article submitted by Marshall Hohmann, Ability Awareness Presenter and Grandview Grad My inspiration to write began in high school when I really got into public speaking. My teachers came alongside… END_OF_DOCUMENT_TOKEN_TO_BE_REPLACED