Daniella Altieri is not only a Grandview kid, she is a role model!

The former Campbell Children’s School student has been selected by Mattel Canada to be an official Barbie Role Model. The toymaker’s new collection of Barbie dolls is modeled after real-life, inspirational females.

Daniella, 15, has Cerebral Palsy and just like her Barbie doll, uses a wheelchair.

The students sat silently as they listened to Daniella share her story.

“I felt like I was about to cry,” Daniella said, recalling how excited the children were and how intently they listened to her every word. “They face me and were ready to listen and kept clapping. I felt so happy!”

Daniella’s journey to becoming a Barbie doll came with help from the Starlight Foundation. Daniella became connected with the organization when her wish to climb Banff, AB’s Sulpher Mountain was granted in 2014. Determined but unable to reach the top on her own, her father Roger carried her to the peak. The wish was life-changing for her and inspired her to stay connected with Starlight, helping to raise money for other kids to get their wishes granted.  When Mattel reached out looking for a Role Model, it was a no-brainer for Starlight to suggest Daniella.

A high school student and athlete, Daniella plays sledge hockey and is part of a ski and snowboard club. She spoke to the students about believing in themselves and reaching their goals, no matter what.

“They can do anything, even with a disability. It can be hard but it won’t stop you from doing what you want. You are not alone. Even if you’re in a wheel chair, you can do anything. Don’t let it stop you.”

Daniella ended her presentation by giving four Barbie dolls to be shared between students in each class.

“I loved seeing the smiles on their faces when I handed out the Barbie’s,” explained Daniella. “When I made those kids happy, it felt really good.” 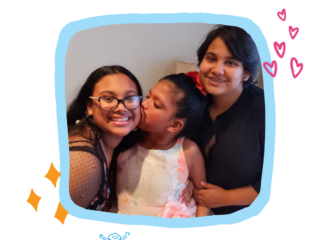 Kayden is a strong-willed, 16-year-old teenage girl that will tell you what she wants and how.