You wouldn’t know Daniel Ferriera has been diagnosed with moderate spastic diplegia cerebral palsy if you were to hear the long list of accomplishments and powerlifting goals he has smashed since his diagnosis.

Daniel is a Grandview kid. He has overcome every challenge that has come his way and never gives up. Daniel is truly living his life to its fullest potential and he isn’t slowing down anytime soon.

According to Daniel’s mom, Anita, Daniel was twin B born two months early in an emergency situation. He was rushed to Women’s College Hospital, going home with his family three weeks later after being bounced around to numerous hospitals. They knew almost immediately that Daniel had cerebral palsy.

Daniel’s journey with Grandview Children’s Centre began almost right away, at around 6 months old. Their experience started with infant development and the preschool outreach program, which equipped Daniel with what he needed for day-to-day activities at the YMCA daycare.

“We were absolutely blessed to have two full years there,” said Anita. “That was a huge changing point for us in that it opened up bicycle options and he had to get a wheelchair at that time and we learned about Botox and serial casting.”

Whatever Campbell Children’s School recommended for Daniel, his family investigated and implemented.

Daniel and his twin brother, John, both used services at Grandview Children’s Centre. Daniel had Occupational Therapy and Physiotherapy services from 6 months on. He participated in swim therapy, karate classes and music classes just to name a few. John used Speech-Language Pathology, Social Work and took part in Siblings Day as well.

While involved with Grandview, Daniel took part in anything and everything he could to keep himself busy and active.

“We took wheelchairs hiking, to the beach, we carried the kids in a wagon…nothing slowed the kids down,” says Anita.

Once Daniel was in mainstream school and walking on his own, he began taking part in every sport he could get his hands on. From track and field, to basketball and volleyball. He couldn’t be stopped and nothing could slow him down.

Now in grade ten, this is still very much the case. Not only is he an honour student, but Daniel is also crushing his weightlifting goals.

A few years ago, Grandview therapist Marj Kennelly asked Daniel to join the Abilities Centre. Some might say the rest is history.

“They had a six week course there about strengthening and conditioning. I signed up for it and I really liked it,” says Daniel. “After that, it just kind of took off. My parents got me a personal trainer at the Abilities Centre and then he recommended that I try powerlifting. So, I went online and found my coach, met with him and everything has just been going from that point.”

Anita can’t say enough about how incredible it was to have Marj in their lives.

“Marj was Daniel’s Physical Therapist in Campbell Children’s School, then she picked him back up at the Abilities Centre,” says Anita. “Marj has been an amazing support working with a teenager, because now it’s his input and she works with him. He’s been able to takeover his own self-care, which is incredible.”

Daniel and his mother say that Marj would always kickstart Daniel when he needed it.

“Sometimes teenagers get into a comfy kind of pattern, which maybe isn’t the best pattern as far as muscle and bone development. Marj had an exceptional way of motivating him in being honest about how if you choose this pathway, this is what you’re choosing for your body,” says Anita. “I have a great respect for her ability to relate to the teenagers and for Daniel’s sake be able to kick-start him and get him on the right track.”

Since this encouragement from Marj, Daniel has worked long and hard to become the weightlifting champion he is today.

What started at the provincial level in Ottawa, Ontario has grown. After this competition, he attended the Nationals in Calgary, receiving a 92.5 kilogram record for bench-press in para, however he also competed in the able-bodied competition as well. This result qualified him for worlds, which he attended this past May in Finland, coming 4th in the world.

What’s next for Daniel? Even bigger dreams.

In December 2019, he will be participating in a para competition in Guatemala.

This will get Daniel the qualification he needs to go to Kazakhstan for the World Para competition. After this level of competition comes the Pan American Games in Peru.

We could not be more proud to have Daniel Ferriera as part of the Grandview family. 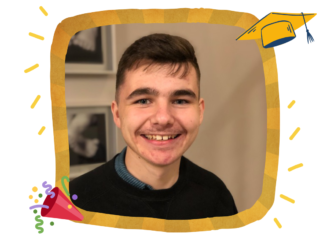 In March, at the top of 2021, soon-to-be college student Owen DiManno was awarded an Empowered Kids Ontario (EKO) Scholarship, a prestigious award only presented to a select few inspiring… END_OF_DOCUMENT_TOKEN_TO_BE_REPLACED