The classrooms at Campbell Children’s School have been busy learning during their last few weeks before summer vacation. Each classroom has been focusing on something different and the kids were incredibly excited to share what they’d been working on.

The Explorer Room has been exploring a few things during the month of June, but lately the kids have been focused on learning about shapes. Throughout this classroom, you can see posters that highlight different types of shapes and the names of those shapes. The kids have been putting shapes together to create different items and have even been incorporating shapes into their artwork.

The Explorer Room has also been curious about beards! For fun, the kids made felt beards and were wearing them around the class. The teacher’s at Campbell’s always allow the students to explore what they’re curious about!

Believe it or not, the curiosity corner has been getting curious about circuits and coding!

Travis, one of the students from Curiosity Corner, demonstrated his ability to complete a circuit. He was not only able to complete the circuit so music played, he was also able to alter it and make the song play on a loop.

Odin, on the other hand, was able to demonstrate how he had been working on coding using the Osmo tablet. The tablet sees what Odin does on the desk in front of him, following his sequence, which moves the character across the screen. Odin was so quick with the Osmo, it was hard to keep up!

The Windows of Opportunity

This classroom has taken the nice weather as an opportunity to explore nature.

In the far corner of the classroom, you can see that the classroom fish named Bill had recently acquired a few new friends.  The classroom has a small fish tank full of tadpoles at different stages of growing. Hunter was excited to share the life stages of a frog, pointing out one of the tadpoles who had already sprouted legs.

This classroom was also excited to show the chrysalis they had, getting ready to turn from a caterpillar to a butterfly.

The students of the Cozy Corner classroom have been spending time making pickles!

They learned about how this yummy snack is made and actually made some themselves. The students were excited to share that they helped to create these snacks and some even remembered the entire process and specific ingredients for next time.

A few of the kids decided to try them, making a couple sour faces, but ultimately decided they were tasty.

We love to see how much these kids love to learn! 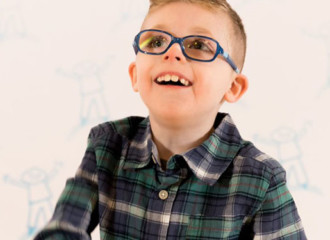 Meet 9-year-old Weston. He is a happy, loving and friendly boy whose smile and contagious laugh can brighten anyone’s day. Weston loves playing on his iPad, with his brother Jase,… END_OF_DOCUMENT_TOKEN_TO_BE_REPLACED